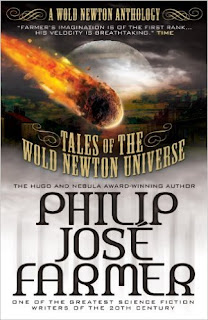 Happy Wold Newton Day, readers! It was on this date, 220 years ago, that a 56-lb stone smacked into Earth at a place called Wold Newton in England, thus proving to scientists at the time that yes, it was possible for rocks to fall from the sky.  More importantly for our purposes here, the impact inspired Philip Jose Farmer to begin tying together numerous literary characters into an extended "family" linked back to seven aristocratic couples and four coachmen he placed at the sight of the impact - the resultant ionizing radiation bath given to these individuals triggering the "nova of genetic splendor" we've discussed before.  I can think of no better way to mark the occasion than by reviewing one of the last pieces of Wold Newton fiction I currently own that I haven't already covered.  It was also one of my final purchases at Pulpfest this year - yes, I'm still working through my haul.

This book is an anthology, collecting several pieces of "Wold-Newtoniana" by Farmer (not always writing under his own name), and others are penned by devoted disciples.

I'm not going to go into exhaustive detail covering each story, but there are a few I'd like to single out to comment on:

"The Problem of the Sore Bridge - Among Others" is probably my favorite piece in this collection, among those I hadn't previously read.  The story follows gentleman thief Raffles as he investigates a series of unusual jewel sales involving flawless star sapphires.  The trail leads Raffles across the path of his criminologist cousin Holmes, conducting a parallel investigation.  Where Watson identifies three cases that Holmes, in his brilliance, nevertheless fails to solve, Raffles - first in the case, as it were - not only resolves them but demonstrates that they were three facets of a single larger and stranger mystery, one with its origins in deep space.

The tone of the story is pretty much exactly what I've come to expect from the Wold Newton Universe, and the characters and their world are very much "alive" and recognizable as the real world, despite the presence of an alien invader.  The story is enjoyable and ties into and expands on the original Doyle cases seamlessly.

This is followed by two "Ralph von Wau Wau" stories that, to be perfectly honest, were not for me.  Holmes pastiches featuring a mutant German Shepherd that talks like Humphrey Bogart and solves crimes using his sense of smell.  They tie into the Wold Newton universe because Farmer references von Wau Wau in Doc Savage: His Apocalyptic Life, and I can see what Farmer was doing when he wrote them, but they didn't do much for me.

"The Freshman" is, I believe, the story that first introduced me to Farmer's work years ago.  I seem to recall reading it in a Cthulhu Mythos anthology years ago.  It didn't make a big impression on me then, and now, while there are elements in it that I really like - I love the protagonist's inner emotional struggle against his domineering mother - overall, I'm really kind of turned off by the idea of Miskatonic University having this reputation as "Black Magic Hogwarts," where you can go to learn spells and summon the Old Ones.

"After King Kong Fell" is another one I'd read before I really became a big Farmer fan, and which I'm somewhat torn on.  There's elements in the story that I like, and others that I really don't care for - and there's actually a very clear line of demarcation for me where I stop enjoying the story.  I stop liking the story as soon as the narrator begins ruminating on the dimensions of King Kong's genitalia and the question of whether or not he attempted to rape Ann Redman.  It's a section that just feels very out of place to me and very unnecessary - especially given how firmly Farmer states that Kong is just an animal.  On the other hand, I very much enjoy the rest of the aftermath of Kong's rampage - the posturing, the competing lawsuits to repair damage caused by Kong, the spirited debate over what to do with the ape's remains.  That part of the story I like.

"Kwasin and the Bear God," by Christopher Paul Carey, we've covered before.  I still love it.

"Into Time's Abyss" by John Allen Small jumps off from Time's Last Gift and sends the time travelers into a parallel dimension, one in which the Magdalenians are harassed and enslaved by a race of humanoid lion-like aliens.  John Gribardson takes it upon himself to break this domination and reassert humanity's right to set its own destiny.  Small really captures the tone and feel of Farmer's novel, and his Gribardson is spot-on, and the story on the whole left me wanting an entire novel running parallel to Time's Last Gift.

"The Last of the Guaranys," by Octavio Aragao and Carlos Orsi, was actually my least favorite story in the collection.  Set during the 17th century, it finds Gribardson in South America, investigating a natural nuclear reactor when he stumbles into the events of Jose de Alencar's 1857 novel O Guarani.  I didn't think the writing was as good here, and the characterization of Gribardson seemed vastly at odds with anything I've seen before.  I can't imagine the character thinking to himself "time to put on the Johnny Weissmueller act" or referring to an animal with "the ugliest son of a bitch." It was just very jarring and as a result the story didn't do a lot for me.

The collection ends on a high note with Win Scott Eckert's "The Wild Huntsman," a story set at the site of the Wold Newton impact in the days and hours immediately before it occurred, explaining why the individuals who were present at the site were there in the first place.  The story also serves to tie Farmer's Wold Newton Universe into his "Secrets of the Nine" series,  I haven't read any of the "Secrets of Nine" books yet, but my understanding is they're a parallel to the Wold Newton Universe - with "Doc Caliban" instead of Doc Savage, etc.  So some of the material here goes over my head a little bit, but not terribly so.

So what's the overall takeaway for me from this volume? Honestly, while I may not have been in love with a lot of the stories, I think the collection as a whole definitely has value as a primer on "what is the Wold Newton Universe?" because it really showcases the wide spectrum of fantastic literature that falls under the heading of Wold Newton.  By putting "The Problem of the Sore Bridge" and the Ralph von Wau Wau stories next to each other, the collection is saying to the reader, "this isn't all serious scholarship and carefully filling in gaps in between stories written a century ago."

And truth be told, that's a lesson I needed.  Up to this point the bulk of Wold Newton fiction I'd read had been fairly "serious" fiction, in that it's been fairly straight forward adventure literature - while it references existing literature, it's not "playful" with it, I guess is the word I'm looking for.  Ralph von Wau Wau is playful in a way Hadon of Ancient Opar is not, if that makes sense.